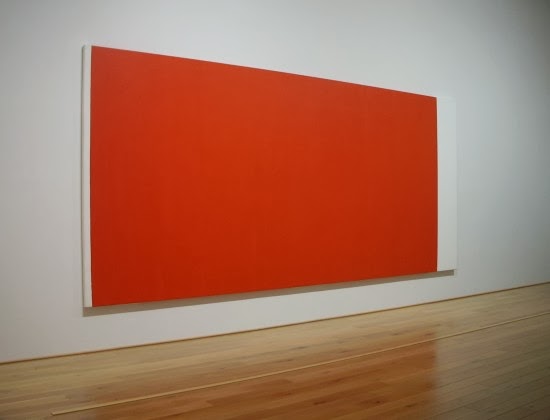 In 2013, Barnett Newman's work made quite a splash at Sotheby's when Paul Allen sold the exquisite "Onement VI" (1953) for $43.8 million dollars, nearly doubling the price paid for the same painting a decade earlier.  Yet, that record-setting price for Newman was nothing compared to what transpired just a few months ago in Japan when the Kawamura Museum sold one of Newman's greatest paintings "Anna's Light" (1968) an acrylic masterpiece measuring 108 x 240."  There has been NO American press concerning this sale and I discovered it when perusing a recent list of the 20 most expensive paintings ever sold. http://www.pinterest.com/pin/478014947920475135/

First,  a little history. In 1988, the painting was purchased by the Kawamura Memorial DIC Museum in Japan from the DIA Foundation (most likely for a million dollars)  and it became a focal point of the Museum's postwar collection since it was installed in 1990. The museum is basically the corporate collection of the DIC Corporation which is in the business of manufacturing liquid inks, lacquers and chemicals and whose slogan is "Color and Comfort by Chemistry."

For those who never saw the painting in Japan or at Pace Gallery in 1988, the painting was part of the huge Newman retrospective  organized by Anne Temkin at the Philadelphia Museum of Art in 2002. "Anna's Light" was one of the highlights of that spectacular exhibition and  ironically, nearly 30 years ago in 1985, the painting went  unsold at Sotheby's as a bewildered Annalee Newman sat in the front row.  The New York Times reported on that evening's sale:

Xavier Fourcade, the dealer who purchased Walter de Maria's Minimal work ''Equal Area Series'' for $45,100, said he was not surprised when the Barnett Newman work did not sell. ''It's a very big painting,'' he said. Annalee Newman, the artist's widow, who was sitting beside Mr. Fourcade in the front row, said she expected the painting might not sell. ''It's a museum painting,'' she said with a shrug. http://www.nytimes.com/1985/11/06/arts/modern-paintings-sold.html

A few years later the DIC corporation in Japan purchased it from DIA. Imagine what that painting would look like at Dia:Beacon today next to Donald Judd and Richard Serra's work, two of Newman's most important acolytes. But I digress.  Apparently, DIC's books have not been looking good and they saw the Newman as a perfect opportunity to pad the financial books by $105 million dollars. Straight from their awkward press release:  http://www.dic-global.com/en/release/pdf/20131004_01.pdf

The press release refuses to name the "foreign" buyer but states:

A foreign company approached DIC and expressed an interest in purchasing Anna’s Light. DIC cannot disclose the name of the company due to a non-disclosure agreement with the company. However, based upon the company’s records of important business transactions in its industry, DIC’s interview with the company, as well as corroboration from a third party, DIC has concluded that the company has no dealings with anti-social forces and elements and has a healthy on-going business. As a result of the transaction, DIC believes that Anna’s Light will be properly maintained and managed at its new home.


The DIC Corporation states that the "purchaser has assured DIC that the work will become available for viewing by the public."  It's obvious that  if a museum had purchased it they would be making that public. So where is "Anna's Light?"  I decided to contact the Barnett Newman Foundation here in New York to find out. The Foundation told me they have "no information on either the new owner or the painting's current whereabouts." Is it destined for Abu Dhabi? Or is it already sitting in some Russian oligarch's pad? Barnett Newman ran for mayor of New York in the 1930s as an anarchist. I wonder what he would have thought of this.