Today was Lower East Side Gallery day for me and so I headed south and east to check out the latest from the other end of the earth. But first just a mere block away from my home was Exit Art's "Geometric Days."  The clear standouts were Paul Pagk's paintings. Pagk has been at it for over two decades and the paintings in this show are both sensuous and smart. 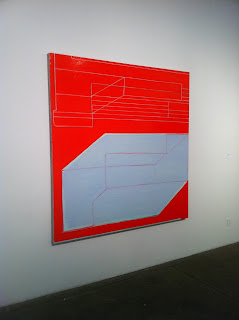 Paul Pagk at Exit Art thru April 30
Meanwhile the Lower East Side scene was quiet with some interesting shows at Miguel Abreau, Leslie Heller and Invisible-Exports.  The latter had a group show based on Susan Sontag's famous essay, "Notes on Camp."  This show was titled "Notes on Notes on Camp."
The king of camp in all media is John Waters and he did not disappoint with his big oversized "Rush"  bottle of poppers.  It deploys the Oldenburg, Gober  "make it big" formula but the
spill and crinkly yellow wrapper are too creepy for comfort and just looking at the thing gave me a headache and made me dizzy.  Rather effective I would say. 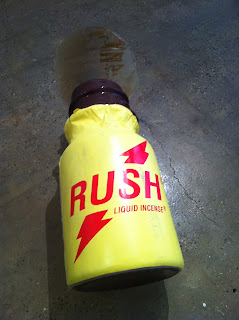 John Waters at Invisible-Exports thru May 8
Posted by Max Estenger at 5:54 PM No comments: 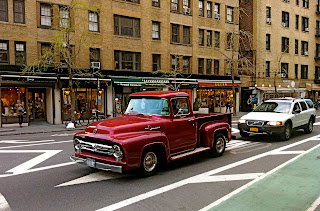 Sometimes an old truck is just an old truck.....
Posted by Max Estenger at 5:26 PM No comments:

The Rehabilitation of Kenneth Noland 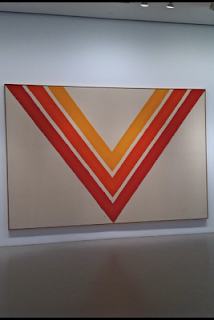 Kenneth Noland at Mitchell-Innes & Nash, NYC thru April 30
Over the past 4 years, both Jules Olitski and Kenneth Noland have died.  At the time of their deaths the critical reputations of both had rebounded very little since the pummeling they received in the early 70s at the hands of former critical champions such as Rosalind Krauss.  For Krauss and her followers such as Yves Alain Bois the revised painting canon went from Pollock, Newman, Kelly, to Ryman and Martin.  Written out were those that had been associated with the late-Modernist formulations of Greenberg and Fried.
This meant that Stella, Louis and especially Noland and Olitski were relegated to being shills for  a debased ideology.  They were the purged Gang of Four while Greenberg was Mao. In the case of  Noland, this had disastrous consequences for his career and his work. The paintings on view here constitute his greatest years as an artist 1958-1968.  His run during these years rank with any other American painter in the post-war period--they encompass the pre-Circle paintings, the Circle paintings, the Chevrons, the Diamond paintings and the horizontal color band paintings.  No one since Matisse had done more with color than Noland but by the early 70s he was pretty much lost. 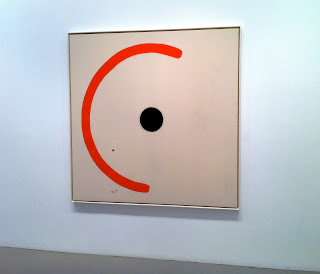 This is the first official exhibition at Mitchell-Innes & Nash presented by his estate.  The paintings look as fresh as they must have 50 years ago.  The Chelsea gallery aesthetic personified by the gorgeous Mitchell-Innes space is a perfect antidote to years of abuse
suffered by Noland's work at the Andre Emmerich Gallery on 57th Street where he showed for decades.
Everything about that space was wrong--the corporate patina was stultifying.  The  jewelry mart feel of the building hallways were further exacerbated by Emmerich's grey carpet.  How this grey carpet came to exemplify Modernism is puzzling as even the MoMA itself adopted the same carpet in the early 80s.  Worst of all was what Greenberg himself did to his artists in the 1960s when he decided that Louis, Noland, Olitski would all look better with a shiny gold metallic striped frame.  Tacky, cheap, gaudy.  It was Greenberg's worst lapse in taste.
The new Noland in Chelsea is in a concrete floored gallery and the aforementioned frames have been replaced by more elegant white shadow box frames.  Noland never looked better and some of the paintings are as good as painting gets--particularly Morning Span and Epigram (both pictured above).   One hopes that this is the beginning of many great shows from the vaults.
Posted by Max Estenger at 2:45 PM No comments: