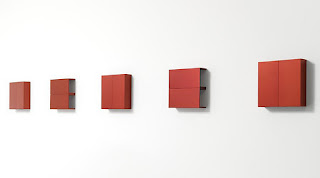 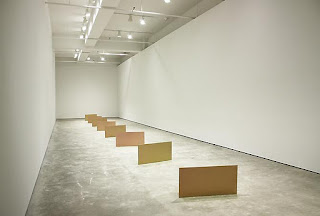 Tadaaki Kuwayama had his first solo exhibition in New York in his late 20s in 1961 at the famed Green Gallery.   He was an early exponent for a radically new reductive language for painting.   In the past 50 years, he has shown all over the world and last week a  new exhibition of his work opened at Gary Snyder in Chelsea.  The new Snyder gallery space is the perfect setting for Kuwayama’s  beautiful work.
Snyder’s gallery is one of the few in New York that specializes in abstract art, similar to the role Eric Stark played in the 1990s in SoHo and Chelsea.  However,  Snyder has focused more on representing artist’s estates and re-igniting interest in overlooked or forgotten artists.  Tadaaki Kuwayama is an artist who has produced an extraordinary body of work , working quietly in his Chelsea studio while art fashions have come and gone.  He is revered in his native Japan but in America has remained known only among those keenly interested in abstraction.
That has been changing over the course of the past few years beginning with a   wonderful show of his paintings from the 1970s in 2008 at Gary Snyder.   He is currently part of a show at the Guggenheim in New York focusing on 1960s monochrome painting and will be having major museums shows later this year and next in Japan and South Korea.
The centerpiece of  this new show is a work comprised of 22 identical 8 x 8 x 2.25” panels of reddish anodized aluminum.   Spanning an entire wall, they are both monumental and light as air.   Behind that wall,  is a new floor piece made up of 8 identical units of anodized titanium.  They strike me as little Olitskis (the sprayed ones)  that somehow dematerialize.  The installation of his work at this show is of the highest order.
The exhibition runs through February 25. Gary Snyder is located at 529 W. 20th Street, 10th floor
Posted by Max Estenger at 7:36 AM No comments:

Posted by Max Estenger at 10:38 AM No comments:

In The Studio with Jocko Weyland 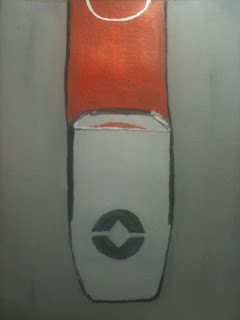 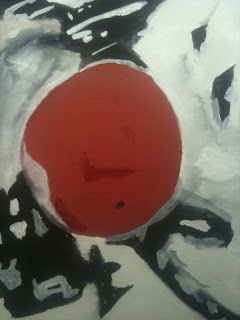 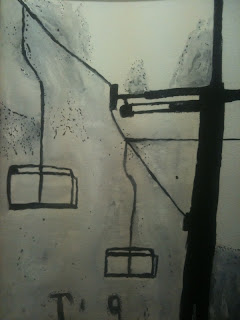 Jocko Weyland has been primarily known through his photographic works, his writings, and his cult zine "ELK." But recently he has made a major foray into drawing and painting and the results have been quite impressive.  His "China" drawings were first shown at Franklin Parrasch two-years ago and his first paintings more recently last fall in the group show  "SCRUFFY"  at KS Art in Tribeca.  I ventured over to Red Hook in Brooklyn to see what was up with Weyland's paintings and discovered some new gouache on paper paintings (all generally measuring one to two feet).  The source material for these paintings is his recent publication The Powder (Dashwood Books)  which is comprised of images culled from the pages of 1970s and early 1980s issues of the  magazine Powder--a lifestyle magazine centered on the then emerging glam world of skiing.

Weyland has made delicate paintings of details of some of these images.  Some are oblique, while others make their referent obvious. I like the ones where I can get what they are better than the more obscure ones.  But he is already on to a technique that is producing some seductive surfaces to match his always keen color sense.  The next move will probably involve a bigger scale and most likely canvas but seeing his initial works makes the anticipation all the more exciting. 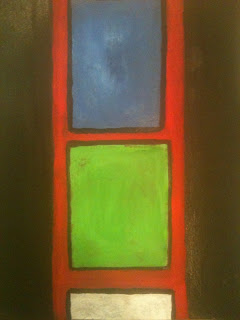 The work above is based on a detail photo of a ski
Posted by Max Estenger at 12:17 PM No comments: