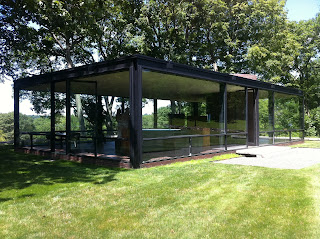 A few weeks ago, I finally made it to see Phiillip Johnson's famed "Glass House" in New Canaan, Ct.  The tour of the house begins at the Glass House visitor center across the street from the Metro North stop and then a 10 minute van ride to the Johnson estate.  The complex houses about 7 structures including his famed painting and sculpture galleries.  The house itself is a simple 1700 square foot open plan with little more than the timeless furnishings of Mies and some eccentric artworks about. The verdict on Johnson's career, life and work are all still points of great controversy.
His early politics seem unforgivable, his chameleon-like stylistic proclivities opportunistic but as a patron of important art he was as instrumental as anyone in the promotion of the New York School. But no one can hold the Glass House against him. It is modest, beautiful and  poetic and along with  Mies' Farnsworth House in Plano, Illinois, the Glass House demonstrated that after the horrors of world war, modernism could provide the  underpinning of a new way to conceive of shelter and home. 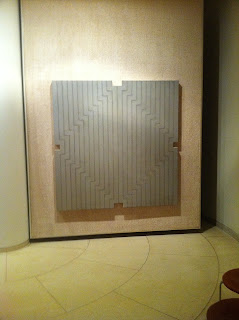 All of the blue-chip paintings have been liquidated from the Johnson painting galleries in order to fund the complex, but Frank Stella's paintings (reportedly Johnson's favorite painter)
were not sold at auction.  They would have fetched millions but much less than the more expensive  Pop paintings that were sold did.  One Warhol remains, however, Andy's 1972 portrait of Phillip Johnson himself.
Posted by Max Estenger at 3:08 PM No comments: